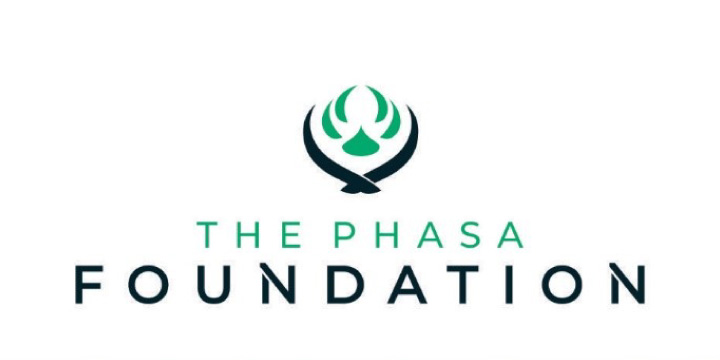 We as Board members keep ourselves busy with the Foundation ‒ not to be patted on the back ‒ we do it, for we believe it is a calling.

Having said that, first and foremost, I would like to thank our Heavenly Father for His guidance, and thank the Almighty for showing us His Grace in action every day. When the call comes for help, the first thing people ask for is prayer, and then for financial assistance. Without our constant believing in Him, our Lord, everything is a waste of time.

Contrary to last year, when we could give all our time and attention to the Foundation, we all had to run our hunting outfits this year. We all had a full season, and had to fit the Foundation into our busy schedules.

It was a great honour to be part of a team that shares the same passion and understanding for the Foundation.

This year, I have been part of a vibrant and active team that supports me 100%, and all our projects could not have been this successful without the support and assistance of my team members.

I personally want to thank every board member by name:

Sybil, Tersia and Marianna in the office. Your contribution cannot be put into words – we are very thankful to have you on our side.

You made this year easy!

Our members and our sponsors:

This is a member-driven organisation, and I want to thank each and every one of you for trusting us as a Board.

Throughout this year, we had different fundraising events, and I would like to extend our gratitude to each and every sponsor who supported us financially to help us achieve our goals.

I wish to thank Nat Shoot for their generous donation of R200 000. Thank you for believing in our cause.

The Foundation stands on three legs:

For the last five years, the PHASA Foundation has been busy with Leopard research.

As noted in last year’s report:

The project gathered data on 12 blocks of some 160 000ha, with about nine leopards (needs to be verified) identified per 10 000ha block.

We as PHASA handed all data to the SA Biodiversity Institute (SANBI) to be peer reviewed, so that research that had been conducted could be added to their database.

We also commenced re-counting on these blocks to determine possible growth or deterioration of the populations.

After completion of the first two blocks, an executive decision was made to halt further research until we had received a written explanation from government, through the High Level Panel, of how they see leopard quotas going forward. We will take into consideration that public participation carries the most weight in determining what the quota will look like, and that research has a lower standing than public participation.

Our Mpumalanga Parks and Tourism Project on Leopard Research is running smoothly, and our equipment is being utilised.

A few years ago, the PHASA Foundation acquired the Cat Spotter program from the Limpopo Hunters Liaison Forum (LHLF), which was designed by one of our members, Marcel de Villiers.

After much deliberation with role-players in the carnivore research industry, we as the Foundation decided to revamp the program to be more science-driven and user-friendly.

We hope to launch the upgraded version very soon.

Despite the ranch lion having been given no hope of survival in the wild, our scientist Paul Booyens has proven everybody wrong. His doctorate programme demonstrates that, without doubt, these lions can integrate into the wild, hunt, have a social structure and breed in their natural habitat.

Paul started the project in 2016 with four females and one male – all ranch lions.

Since the start of the project, 28 cubs have been born. At this stage, there are six adults and nine cubs on the reserve. In 2021, two litters were born in the wild as F2 generations – meaning that these litters will now be classified as part of the wild managed population.

We have successfully proven that ranch lions have a conservation value.

I also want to extend our gratitude to Tienie Bamberger, who contributed a great deal of his time, energy and finances to this important cause.

I also want to extend my gratitude to everybody who contributed financially to the Lion Research Project by giving a portion of the income from each lion hunted, thereby also contributing to the conservation value of these cats.

Paul will be submitting his doctorate during November and then the PHASA Foundation will launch a documentary video outlining the whole Waterberg Lion Project.

The Foundation contributed financially to the Ranch Lion DNA Database.

Research on Lead Poisoning of Vultures

The PHASA Foundation, in conjunction with Sustainable Use Coalition (SUCO), has embarked on a research project regarding the lead poisoning of vultures in South Africa and the South African region. There is not much we can say at this stage, but watch this space for developments on this project.

The ASBY Foundation was founded in Texas, USA a few years ago. The foundation is responsible for norms and standards of bow hunting in Texas, in collaboration with Texas Fish and Wildlife.

PHASA signed a MOU with the ASBY Foundation when their president, Rob Neilson, visited South Africa this year.

I worked closely with Rob Neilson during his visit and conducted penetration tests on a hunted buffalo cow. The video of our findings will be distributed though our PHASA channels, and our goal is to provide an informative video to educate our clients and us regarding hunting dangerous game with the bow.

The PHASA Foundation, in conjunction with SUCO members, has embarked on a research project with the North-West University.

The aim of this project is to determine and quantify what the hunting industry in South Africa is worth.

Through this research project, we aim to demonstrate our social impact and responsibilities to Government because the worth of the hunting industry is underestimated and we offer so much more than what people believe.

Some R63 000 was received from five members out of 348 Hunting Outfitters, all full members, as part of our voluntary contributions for 2021. Just imagine what we could achieve with everyone’s support! So, the next time someone asks me what PHASA has done for me, I will only talk about those five.

A lucky draw with all the members that contributed (us five) will be held at our gala event and the winner will receive a rifle as appreciation for their contributions.

Norms and Standards, and Accreditation for Large Predators in South Africa

We want to thank the Lion Task team for putting in so many hours to compile a working document; and Clara van der Vyfer (consultant), who assisted us with the writing and compilation of the PHASA Norms and Standards for large predators in South Africa.

The PHASA Foundation paid a veterinarian to immobilise a leopard that was caught in a snare.

Mariska Kannemeyer, our leopard researcher, was present during the process and DNA was obtained.  Mariska released the animal 14 days after it was captured.

We started this programme during 2020 (during the Covid-19 pandemic), as there was a great need for food and clothing for the poorest of the poor.

Throughout this year, donations of clothing and food have been delivered to PHASA House, from where they were distributed to those in need.

We worked closely with Philadelphia Ark, an NGO near Hartbeespoort, which acted as a distribution centre where the neediest received priority.

We also want to thank our national and international hunters who contributed more or less six tons of meat – almost 20 000 protein meals to the needy.

And a special thanks to one of our members, Kruger van Zyl, who gave 30 tons of pumpkins!

The Foundation also reached out to PHASA members in dire need of food to feed their families. Some R54 000 was spent on helping these families.

When the hunting season started, these members no longer needed assistance, as they are now in a position to support themselves again.

The PHASA Foundation supported Lisa Mari when her husband-to-be, Tiaan Schoeman, passed away in a tragic car accident. Bianca visited her, and gave emotional support and lots of baby things for their then unborn child. Gerhardus was born during 2021 and we pray that he will have a full life surrounded by love.

On Sunday morning, just after the AGM, Dries and I received a phone call from one of our members to financially assist Baby Hunter.

Baby H was three months old and had to receive open heart surgery.

We are so grateful to announce that Baby H celebrated his first birthday and has completely recovered.

Barend Swart was hunting for a PHASA member in Zimbabwe when he contracted malaria, which went untreated for a while. Barend ended up in hospital and had no medical insurance.

The PHASA Foundation initiated a fundraiser and all Barend’s medical expenses were covered. Barend fully recovered.

In a freak accident, Marco was stabbed right through his intestines to the back of his spine by a gemsbuck. Thankfully, he was in the presence of educated professional hunters and was quickly medevacked.

Marco had a medical fund, but requested PHASA’s assistance for all the additional co-payments.

We also want to thank The Frontline Foundation of DSC for their contribution.

It is a miracle that he is alive, and we can only give thanks to our Father in heaven who never sleeps, for his recovery.

What a privilege to give feedback on Robbie: the original diagnosis was that Robbie was going to be a quadriplegic.

Today, Robbie can walk – with constant prayer, faith and hard work, anything is possible.

Clinton Stone was diagnosed with sleeping sickness in Zambia, and was flown to South Africa, where he spent a few days in intensive care.

The PHASA Foundation and WRSA initiated the Free State Fire Fund in 2020.

Some R340 000 was raised for the Free State Fire Fund this year. The last 10 loads (300 tons) of feed were delivered to the affected areas a few weeks ago.

We sent loads all over the Northern Cape, Eastern Cape and Free State.

The PHASA Foundation contributed an amount of R100 000 to PHASA’s legal fund.

The following organisation also received financial support from the Foundation:

We want to thank the 24 donors who participated in the online auction.

Of the 400 Hunting Outfitters who are part of PHASA, only 24 contributed by offering donations. We salute you.

The PHASA Foundation hosted a golf day on 22 October 2021, where 23 teams competed.

Paul and Riaan – you did us proud!

The PHASA Wildman national shoot was organised by Pete de Villiers and was a huge success, once again.

I also want to thank Pieter Potgieter and Dries van Coller who supported Pete with this event.

No one has ever become poor by giving – Anne Frank

We use cookies to ensure that we give you the best experience on our website. If you continue to use this site we will assume that you are happy with it.AcceptPrivacy Policy